The big epoch of Serbian mediaeval art began at the end of XII century and the beginning of the XIII century. In that period, by the Great Prince Stefan Nemanja's coming of the Serbian throne, the state independence was established. Also, the curch independence was obtained thanks to St. Sava's merits. 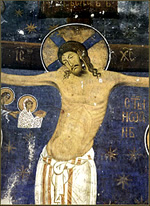 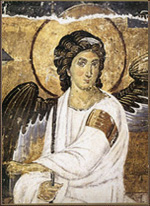 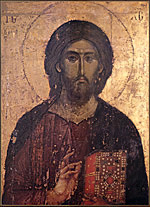 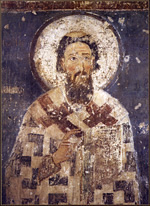 At that remarkable time, a large number of monuments of extreme artistic value named The Raska School after the young state were created. Nemanja and his descendants founded churches and monasteries. The monumental style of mediaeval art was developed under a big influence of Byzantium, i.e. empire masters coming from Constantinopole and Salonica.

Cristian Byzantium carefully kept cultural heritage of antiquity, without fearing pagan art. The most beautifil deeds of that art created in the monasteries of Studenica, Zica, Mileseva, Moraca, and especially Sopocani, represent the most important artistic values in Serbian and European arts of that time.

The voluminosity of figures and the big frontal, symmetric and monumental composition, inspired by epic power, are the main characteristics of Serbian fresco painting of the XIII century.

Through the world of art, illustrated by the photos of frescoes and decorative plastic, textual legends of our most important researches in medieval art, we have tried to conjure up the beauty of our medieval churches and monasteries, great erudition of their founders and, finally, the everlasting glory of our original values from time immemorial. 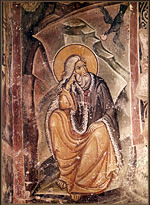 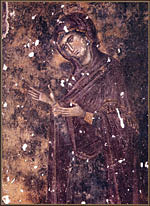 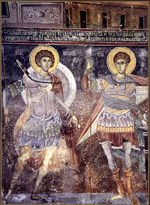 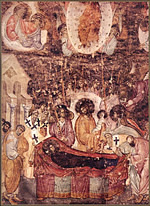 Dormition Of The Holy Virgin Fresco painting, around 1265 Sopoćani Monastery